What are bush hammer tools?

Bush hammer is a masonry tool used to texturize stone and concrete, to make a litchi surface, which is a rough surface. 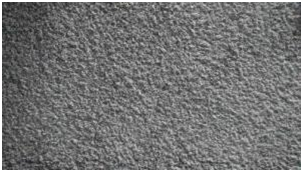 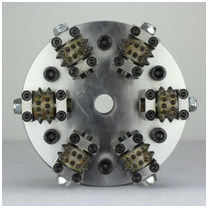 Although the appearance is different from the hand bush hammer and rotary bush hammer. But the basic theory is the same. What works is the carbide tips. The carbide tips strike on the surface of stone or concrete, to make the rugged surface, or we call it “litchi surface”(Just like the shell of litchi). The litchi surface has 2 purposes, one is for the shape of beauty, and the other is for functional applications, like anti-skidding.

Now, let's focus on the rotary bush hammer, because it is more efficient and has a better performance than hand bush hammer.

At first, there are several types and sizes for carbide of bush hammer, such as “Point Type”, “Triangular Pyramid”, “Planetary Type”, and “Knurling Type”. Different types make different surfaces. The carbides are welded on a "core" and make up the bush hammer head together with other components. Let’s look at the structure of tips type bush hammer head/roller for reference:

Second, the bush hammer head have several different connecting types with different machines, such as Frankfurt type, Single layer plate, Double layers plate, Sink down type. They could be used on manual tools, or floor grinders, or bush hammer machines. 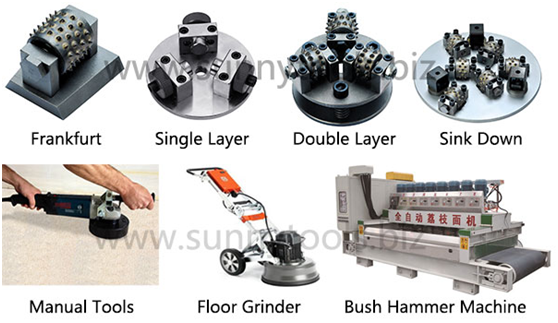 Third, the appearance of the final surface not only related to the shape, numbers and arrangement of carbide, but also the rotary speed and feed speed(for machines). The arrangement of bush hammer head/roller needs to be symmetrical, thus it will be balanced when working, also increase the lifespan.